Check out these top 3 Ghost Story locations in Union County, NJ if you dare!

Stories of the paranormal have been around for years. In most cases you’ll get some naysayers who will always try to debunk the tales.

-But, sometimes, there are things that simply cannot be logically explained and we have to open our minds to the unknown…

Ghosts, spirit of the dead, phantom, or poltergeist…any way you say it, it’s just plain freaky.

The honest fear of questions that have no explainable, real answers. The victim, described by police as a young woman in her early 20’s with blue eyes and brown hair, was found frozen in the mud on Rahway’s Central Avenue early on the morning of March 25, 1887, her throat slashed and her face badly beaten.

She had worn a feather-trimmed green dress, yellow gloves, “foreign good shoes”, jewelry, a fur cape and had been carrying a basket of eggs. Since her jewelry had not been taken, robbery was ruled out as a motive and it was assumed that she was a foreign prostitute who’d fallen prey to a drifter.

It became an International famed crime – and considering this was an era with no TV, Radio or Internet – for it to catch the attention of people all over the nation, as well as Europe was a very dig deal.  This case brought world-wide attention to lil’ old Rahway.  Rewards were offered, photos of the victim were published in leading newspapers and many witnesses and suspects were called, but nothing was conclusive enough to close the case.

*And even more unsettling , no one ever came forward to identify the mystery woman.

Hannah Caldwell, wife of the fighting parson Reverend James Caldwell, was the first woman killed during the American Revolution. Hannah and her husband are buried in the cemetery next to the Union County Courthouse. However, how she was killed isn’t certain – some stories say she was mistaken for a sniper by a British redcoat. Others say she was murdered in retaliation for her husband’s activities. Still many individuals blame that it was just a stray shot that killed Hannah. Either way, her death rallied the area’s farmers to participate in the revolution.

As far back as the 1970’s,  people reported seeing ghosts in the cemetery and courthouse. Some suspect that one of the ghosts is that of Hannah Caldwell herself.  Many people report seeing a woman all dressed in white near the elevator. Other people report seeing a woman in white colonial clothing floating through the parking garage and court corridors. The face of Hannah is sometimes seen in the window of the first floor office. Ringing bells and footsteps are heard in the courthouse Rotunda. A psychic paid a visit to the courthouse and reported that Hannah was not pleased with the way her murder was depicted on the Union County seal. Sci-Fi channel’s Ghost Hunters featured the Union County Courthouse and cemetery in 2009.  Many crew members reported seeing a shadow pass by a painting of James Caldwell. They captured footage of an apparition walking across a room and through a wall. Other footage shows an apparition vanishing along a path.

Chances are, if you live in Union County, NJ, you’ve heard of the legend of the 13 witches and you know about the 13 bumps in Johnston Drive. If not, the story goes like this…

In 1845, David Felt set out to build “Feltville”, a small village made to provide homage to the local paper mill workers. Roughly 175 residents called it home. The deserted village consists of cottages, a small store-church, a cemetery, and what’s left of a small mill. It is located in the Watchung Reservation in Berkeley Heights and is now maintained by the Union County Parks Division.

Around 1860, the villagers tried to keep their home together when David Felt decided to retire to New York.  But, it is said that 13 sisters (witches) descended on the town and preyed upon the village children kidnapping and murdering them in staggering numbers.

Legend has it that the 13 sisters were tried, hanged and buried beneath their hometown street, Johnston Drive, their corpses leaving behind 13 large bumps in the road. Logical explanations have been speculated, and of course no one really believed that there were child murdering witches buried beneath the earth, until they paved the road and the bumps reappeared. Every time they paved the road, the bumps would rise again, leaving this town to carry on its legend of the 13 witches of Union County.

It is said that if you drive over the bumps and count them and say “thirteen witches” then turn around, you will see the witches following you behind your car. 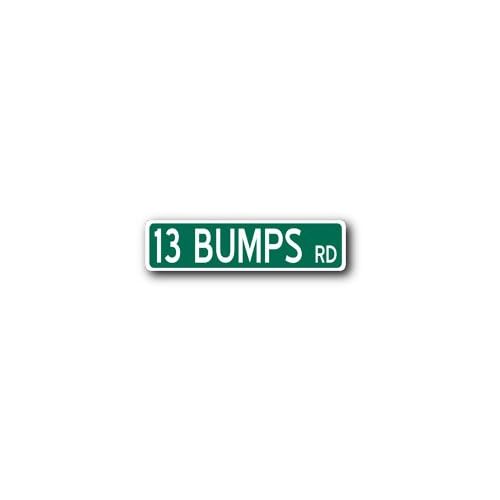 Oscars By The Numbers- Infographic While which film for Best Picture, Best Actor or ... Planning for your upcoming NFL playoffs party coverage? We wanted to share some fun and ... Who doesn’t love to indulge in bouts of nostalgia occasionally? We long for those ...