The mob is exposed when law enforcement makes arrests. Then newspapers print stories about men with colorful nicknames and their “alleged” acts of murder and racketeering.

Such stories are in short supply these days. When the newspapers do cover a mob story, it generally details elderly men who committed crimes going back decades. Take the Vincent Asaro trial this year. Billed as the big Lufthansa Heist case, which was spotlighted in the cinematic classic Goodfellas, which many fans consider to be the most accurate take on the mob (though the mob of the 1960s and 1970s). The trial ended in a shocking acquittal for the 80-year-old defendant, a former pal with James “Jimmy the Gent” Burke.

The mob is not the power it once was. But is it finished? Has it reverted back to the street gangs from which New York’s Five Families originally emerged in the late 19th and early 20th centuries? The facts seem to suggest otherwise, though hold on to that street gang reference….

The Mafia is a secret society whose members are known to go to extreme lengths to hide their allegiance, not to mention their criminal acts as well as their relationships with criminal cohorts, their meetings, etc. The social clubs are shuttered and there’s no more John Gotti—meaning today, there are no “household names” in the mob.

The New York crime families also have benefited from terrorism, which has absorbed a larger allotment of the FBI’s resources. Law enforcement officials said as far back as 2011’s Mafia Takedown Day that the FBI was reorienting itself finally, following 9/11. The recent shootings in California and the large-scale attacks in France are likely causing even more of the FBI’s men and material to withdraw from the battle against organized crime.

Historically the Mafia was able to reach the level of power it once did due to the FBI’s focus on communism. Terrorism may possibly prove to be the “new” communism. The American Cosa Nostra was organized specifically to perpetuate itself. No matter how many single individuals are knocked out by death or prison, the structured institution itself—last year pegged by the FBI as about 8,000-strong, including inducted members and associates—continues, and learns.

Today two FBI squads are investigating the New York mob. At the height of the Fed’s war on the Mafia, there were five units, one for each crime family. In June 2013, the FBI first reported that there were only two New York City-based squads watching mobsters—a more-than 50% reduction.

The Mafia, meanwhile, is trying to lower its profile and become as invisible as possible, officials and experts said.

Crime families also have changed in major ways. First off, they are less territorial and more willing to cooperate with each other. In terms of organization, Mafia crews are more isolated. This way, members and associates have less knowledge about a family’s overall workings. This mitigates the damage if an undercover agent slips into a crew. Also if a crew member decides to flip, he will not have as much to offer his handlers other than what’s happened inside his own crew.

The families are less involved in crimes with lifetime penalties, including murder, which supposedly is banned. In terms of revenue-generating rackets, the ones that do the most damage when uncovered have been outlawed. Financial fraud, the pump-and-dump boiler-room-type scams that served as a major racket in the early 1990s are “outlawed” businesses for mobsters, as much as narcotics supposedly is.

The mob is reverting to its original, basic, core competencies: loan-sharking, extortion, gambling, narcotics, and infiltrating organized labor. They still manage to find the occasional blockbuster niche. These days these include offshore online gambling and the illicit selling of drugs such as Viagra.

The Mafia is adding to its ranks, as well. “They can replenish when they see fit but they have to stay within the quotas set by Luciano,” the source said. Quotas were established, along with the “official” five families in 1931.

Still, the mob has suffered—it’s been seriously damaged by law enforcement’s large-scale efforts begun roughly in the 1980s. Sources have revealed that the Mafia’s Commission, erroneously declared defunct by newspaper reports 25 years ago, was only abolished in the past few years. Created in 1931 under Charlie “Lucky” Luciano’s auspices, the Commission provided planning and oversight for the Mafia’s “inter-family rackets.”

Still, the crime families “have their way of doing things,” as one ex-mobster told me.

The source, made in the 1970s, also said that three of the New York families (the Genovese, Gambino, and Lucheses) are in operation while the other two—the Bonannos and Colombos—are in disarray.

The Colombos have suffered from having a boss calling the shots from prison for the past few decades. The Colombo family engaged in full-scale civil war in the 1990s when then-acting boss Vittorio “Little Vic” Orena sought to assume control from the longstanding official boss Carmine “The Snake” Persico. Orena was sent away for life. Persico retains control. When a new Colombo boss is named, it will mean either the Snake has died or was finally successfully unseated by the youngest and most violent mob family in New York.

So it seems that the families able to muster enough men to show power on the street and run scams also are helmed by powerful and accessible bosses.

The Genovese family has historically never revealed its true bosses even to other crime families. This helped buffer the family from law enforcement. It also helped to strengthen the family’s hand at sit downs.

“We met with the West Side several times to take care of a certain situation,” a source once explained. “Every time we met, they had different guys in there! We had to start from zero every f—ing time!” Evidently by sewing small-scale confusion and aggravation into such situations, by simply having new “officials” show up at meetings who “knew nothing” about a particular issue or problem, the Genovese hierarchy was able to win more sit downs—or at least to lose fewer.

However, the mob’s collective eye is on the 1931 organizational plan. The three operational families are helping to run the remnants of the other two. New York’s Gambinos also have a level of control over the New Jersey-based DeCavalcante family. The Gambinos are said to have raised Frank Cali to boss in the hierarchy. Cali has strong ties with certain Sicilian Mafia families. A past investigation revealed there’s possibly large-scale drug trafficking resulting from certain overseas meetings Cali has had in Sicily.

Meanwhile, a ‘Ndrangheta crew (from the Mafia based in Southern Italy, in Calabria) was found operating in New York—specifically it was running a billion-dollar drug trafficking ring with members of two New York crime families, the Bonannos and Gambinos. This year, an alleged ‘Ndrangheta member was arrested for allegedly acting as a drug broker between the Calabrian mob and the Mexican cartels. He operated a pizzeria located in a Queens neighborhood known to be overseen by a powerful Genovese capo.

There’s one final piece of the story—the mob forming alliances with street gangs—that this writer thinks are happening based on two recent law enforcement raids, one in Montreal and one in New York.

The New York case also demonstrates the mob’s willingness to commit murder when necessary. Though hits seem to not be happening these days, the mob still kills.

Michael Meldish was offed in November 2013. This murder is widely regarded to be the last mob hit.

A powerful Luchese boss named Matty Madonna, 79, was said to be angry at Meldish some eight months before the doomed associate was shot to death (one bullet in the head, fired at close range). At the time, Meldish supposedly worked for Madonna, collecting payments, among other things.

A powerful ranking member, Madonna is a personal friend of the Luchese family’s official acting boss, Stevie Crea, a Bronx-based savvy mobster said to be increasingly focusing on “legitimate,” meaning lawful, business. Crea is out of prison. The family’s official boss reportedly remains Vittorio “Little Vic” Amuso, inside for life. 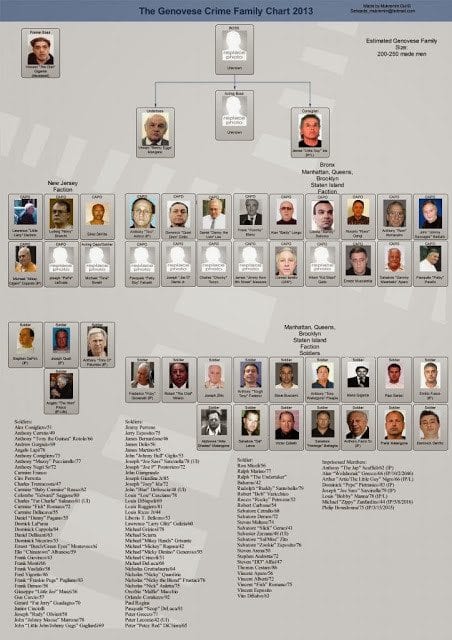 Madonna and five other Luchese family members pled guilty to racketeering charges this past June. Madonna was sentenced to prison in New Jersey state court in late September for his role in an international gambling ring.

The arrests were made following an investigation known as Operation Heat, which stumbled upon the $2.2 billion global gambling enterprise, which also profited from a prison-smuggling operation.

Law enforcement officials were shocked at finding the Bloods-affiliated street gang had joined forces with the Mafia.

Mafia crews shun the spotlight, while gangs like the Bloods and Crips are proud to show their gang affiliations, taunting law enforcement and the public with raw displays of power and wealth.

One law enforcement source noted that while prosecuting organized crime and street gang cases between 1998 and 2003, “he frequently heard members of the Bloods speak of Mafia members and customs with admiration.”

“The Blood guys love mobsters because they’re the old-school gangsters,” he said. “A lot of my Mafia informants in prison would complain that they couldn’t get away from the Bloods always following them and fawning over them.” In Montreal, a recent bust also involved the Rizzuto Mafia organization, the Hells Angels outlaw biker club and street gangs—including the Syndicates, which is less directly linked to the Bloods in that some of the members were former Bloods members, according to newspaper reports.

The United Blood Nation is heavily concentrated throughout New York City. Widely known for its rivalry with the Crips, the Bloods members wear the color red.

As many as 20,000 members are believed to have sworn an oath to the gang. That’s a lot of gangsters.

Video: Ryan Gosling Gets a Case of the Giggles The energy market is one the extremely volatile markets. Due to this volatility of ... The Benefits of Investing in the Best Cryptocurrency Exchanges

Cryptocurrencies haven’t been around for long, and perhaps this is why so many people ...