Since this might be a bit controversial of a topic, let me begin by saying that I do not condone cheating. I have never cheated on a significant other and don’t have plans to. With that said, I would like to address the seemingly increasing issue of what I like to call “The Nanny Effect.” Or, in layman’s terms, when high-profile celebrity men cheat on their wives with the scorching-hot hired help, aka, the nanny.

This is not a new issue to say the least—cheating has existed for as long as we have. With digital media giving us news within seconds of it happening, we are instantly informed. Cheaters have always cheated. Right? But twitter will get your proverbial mugshot rolling to social feeds before your pupils have re-adjusted from the flash. Screenshots of those “private” text messages you fearlessly sent in seconds will be blasted out to a social network. (Helpful note: texts don’t get deleted from the universe just because you delete them). I scoff at the idea that people really think they won’t get caught in a society where your digital footprint provides more information about you then your social security number and your flesh fingerprint combined.

Case in point—the recent “rumored” news about Gavin Rossdale cheating on Gwen Stefani for three years with their family nanny. Jenner Garner and Ben Affleck, same story. Alleged celebrity nanny affairs also include A-listers like Jude Law, Ethan Hawke, and Rob Lowe (I promise you the list does not end there, but for the purpose of my point, it does).  What did all of these scandals have in common? THE HOT YOUNG FEMALE YOU DECIDED TO HIRE TO CARE FOR YOUR FAMILY. As a women, my jealousy level is probably lower than most. It is not to say that I don’t have a hot-blooded, green streak now and again. However, I keep myself aware and try to make smart decisions by using my intelligence level over some of my “deadly sins.” Good old-fashioned logic helps too. When photos of Christine Ouzounian surfaced, my immediate thought was “Jenn Garner, why in God’s name did you hire a hot, young, trendy, thin, fiery woman and give her the keys to your home and your family?” I am a straight-as-an-arrow female and even I want to hook-up with Ms. Ouzounian, she is stunning. I am mature and secure enough to admit that out loud. I blame Ben for not having self-control, I truly do. It still sickens me. Vows are a sacred commitment and a divine contract—they are meant to be as secure as Fort Knox. Jen, were you drunk when you said yes to this? Now that images of the Rossdale/Stefani nanny have materialized, I say the same.

Let me be fair—good references, discretion, solid work ethic, and experience are all of the utmost importance when hiring an employee, especially one that entails caring for the fruit of your loins. Looks should really hold no value (except when it comes to careers in modeling and, well, acting). Let us also call a spade a spade and bring forth a little something called history and how it has repeated itself over and over and over (specifically in this particular arena). I can hear some of you ready to battle me on the idea that these are poor reasons (and in some cases illegal reasons) to hire or not hire someone. But in the land of female logic and solid reasoning, don’t swim in shark-infested waters. You will get a limb chomped off every time. Point being, don’t hire the long-legged, raven-haired, busty, former model as your children’s au pair. And if you do, be sure she is a full-fledged lesbian (not a teetering-on-the-fence one).

Merriam-Webster.com defines temptation as “fundamental desire to engage in short-term urges for enjoyment, that threatens long-term goals.” That one little noun has great power over us. When you are dieting, do you have your morning coffee in Dunkin’ Donuts where the smell of those tasty little Munchkins can make the scale go up via osmosis? No, you don’t, not if you are serious about losing weight. If you are a recovering alcoholic, do you sign up willingly for the annual pub crawl? No. Not if you are truly in recovery. The list goes miles long. The reason is all in the temptation. No matter how good we are—how strong we are, how focused we are—we have all been swayed by it (and all the while knowing it was happening). You remove the temptation, you remove the threat to your long-term goals. In this case, the long-term goal being a monogamous marriage and honoring your vows. I am in no way attempting to say that this will solve the age-old issue of cheating.  I am a journalist, not a magician. What I am saying is it might minimize these types of situations.  No one was looking to cheat with Mrs. Doubtfire.  #JustSayin 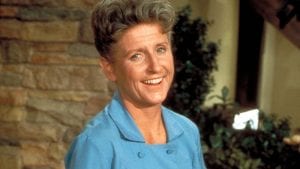 Some other famous nannies through the years that no one was sleeping with: Mary Poppins, Alice from The Brady Bunch. Edna Garrett from Diff’rent Strokes and The Facts of Life, the Supernanny Jo Frost, and Nanny McPhee.

Top 8 Tips to Create a Warm, Inviting and Healthy Home This Thanksgiving 7 Shopping Hacks If You Are Low On Your Budget

Being a shopping freak is one point, but wasting unnecessary money while shopping is ... An Olympic Champion. So many of us dreamt of it as a child, but ... It is not as difficult as you think! It is probably a well-known fact ...