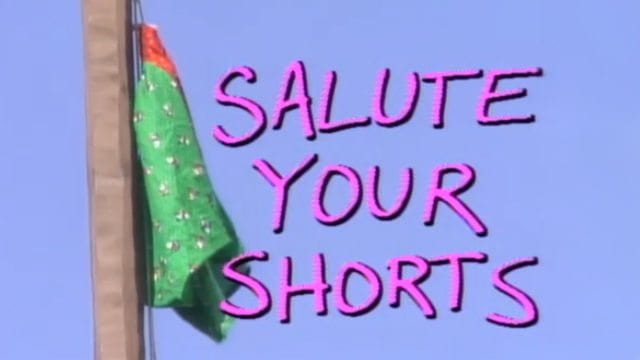 The Nickelodeon comedy series Salute Your Shorts was a popular ‘90s show featuring a bunch of teenage campers and their antics and activities at the camp. The show starred many young actors and actresses and most were virtually unknown at that time. They were rookies but such was their vivacity and vitality on the screen that they made us wish we could step into their shoes at Camp Anawanna. We wonder where are they now.

After being Ug, Kirk Bailey went on to act in The Melrose Place, Star Trek: Voyager, Felicity, and Soccer Dog: The Movie. However, he has found more success as a voiceover artist. He has provided voice work in Yogi Bear, ParaNorman, and Frozen and many anime movies and video games. He has also worked as part of the ADR Loop Group in movies like Romy and Michele’s High School Reunion, Alien vs. Predator Requiem, Rise of the Planet of the Apes, Night at the Museum: Secret of the Tomb, Rango, and X-Men: Days of Future Past.

If you have attended a summer camp, you know there is always that one quirky guy or one intriguing gal who marches to his or her own tunes. In Salute Your Shorts, this eclectic individual was Z.Z. Ziff. She appeared in The Positively True Adventures of the Alleged Texas Cheerleader-Murdering Mom before bidding adieu to acting.

She attended Colorado College from 1996 to 2000 and then completed a Master’s program in International Political Economy from Stanford University. She has worked with Kiva, a non-profit organization that partners with microfinance institutions across five continents to advance loans to underprivileged people in remote rural areas without access to banks. She has worked in various regions of the world, like West Africa, as a Kiva Fellow and has been a Development Manager with the organization. She now works as an aid worker in Haiti.

Quite an eclectic career!

Michael Bower may have been cast as the stereotypical fat guy at the summer camp, but since Salute Your Shorts, his career has been anything but staid. He acts, appears in music videos, provides voice work, and also has his own movie review blog. He has appeared in various episodes of The X-Files, Friends, Monk, CSI, and Dark Angel. He has acted in movies like Evolution, Dinner with Ralph, Dumbbells, and Geek USA. He has appeared in a rap video by Angel Haze.

Michael wear several other hats as well. He teaches acting, hosts a talk show for the Oakland Raiders, and has started his own production company, Generation12.net.

Venus DeMilo enjoyed a dream stint in front of the camera after playing Telly. She acted in several episodes of Family Matters; Sister, Sister; and The Bold and the Beautiful. She also appeared in the movie Ghost World. But while pursuing a degree in Communications at the Loyola Marymount University, Venus discovered her calling was behind the camera and in the field of production.

She has worked as an Agent Assistant for The Thomas Talent Agency, a family-run business besides being a production assistant, manager, and producer for various media and entertainment firms. She has worked with Sony Pictures Entertainment and is currently working as a Senior Coordinator for Video-on-Demand Media at Paramount Pictures.

After Salute Your Shorts wrapped up, Tim Eyster appeared in one episode of Babylon 5 and changed his name to Trevor. He then disappeared from the world of showbiz to “pursue other life interests,” but is now back actively seeking acting assignments. Since his comeback, he has appeared in several short films: Pagtawid: Crossing, Method, Monkey with a Moustache, and Man’s Game. Most recently, he has appeared in an episode of Bones.

At every summer camp, there is that one girl who everybody is fond of. In Salute Your Shorts, the camp’s most popular girl was Dina, played by Heidi Lucas. After endearing herself to everyone as Dina, Heidi appeared in several more TV shows: Boy Meets World, Saved By the Bell: The New Class, The Wayan Bros, and Hypernauts.

She took a bow from acting and went on to study law at the Indiana University School of Law, graduating in 2005.

After Salute Your Shorts, Danny Cooksey has worked primarily as a voice artist. He has provided voice work in several Disney and Nickelodeon productions like Pepper Ann, Invader ZIM, Pound Puppies, The Lorax, Hey Arnold, Dave the Barbarian, Kim Possible, Little Mermaid, and 101 Dalmatians. He has been a part of two rock music bands—Bad4Good and Shelter Dogs. He has also been a spokesperson for the Epilepsy Foundation.

Summer camps teach us valuable life lessons. Spending time and interacting with other kids teaches us empathy and camaraderie while learning to live and play by the rules at the camp teaches us discipline. The various camp activities teach us to be bold and enterprising. It seems that the cast members of Salute Your Shorts have imbibed these lessons from their reel experiences and are practicing these in their real lives. 4 Tips for Safety in Online Dating Best 10 Affordable DIY Tips for Millennial Homeowners Shiplap Shiplap may be the biggest ... Planning a Catholic Funeral in the UK

In the UK, planning a funeral for someone who was a committed Catholic in ... By employing an army of social influencers, this LA based fashion label grew to ...